Climate scientists and urban planners increasingly suggest that one of the most impactful ways to slash greenhouse gas emissions is to make cities denser. This change, scientists have calculated, is even more impactful than installing solar panels on all new constructions or retrofitting old buildings with energy-saving technologies. Residents of cities like San Francisco, Chicago, New York and Minneapolis already have much lower carbon footprints than in the surrounding suburban sprawl. City dwellers tend to have smaller apartments that require less energy to heat and cool.

But it also means a certain American way of life may have to end.

The Bush pére doctrine — that “The American way of life is not up for negotiations. Period” — has been in play for 30 years.

The reality now seems to be that we must negotiate with hostage-takers who mean to kill anyone who prevents them from getting their way…you know, terrorists. 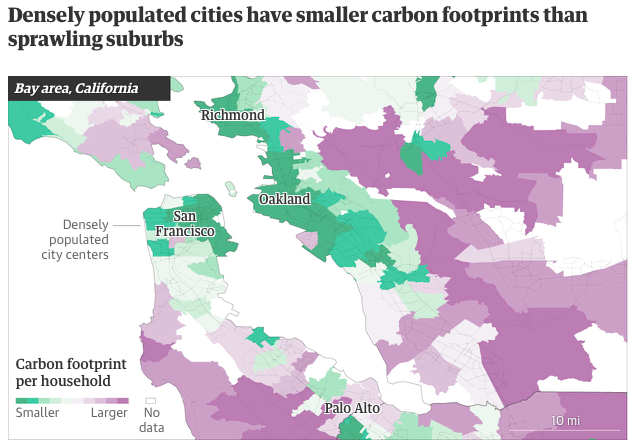 What I see is that there is a quite a bit of dense urban land use — Sunset is in the green/dense bit — but that it turns to suburbs pretty quickly. The lower peninsula could be more dense, but for zoning and height restrictions. If Atherton wants 1 acre lots, it should be taxed on the productive value that land represents: an acre that close to San Francisco could be making a lot more money for the municipal area, enough to fund the transportation needed to get into the city.

The quiet, tree-lined Sunset District has been roiling with controversy over the construction of a seven-story affordable housing unit. At tense community meetings, residents complain that the construction would block sunlight, drive up congestion and rustle up toxic dust. “Not in my backyard” demonstrators clashed at protests with progressive “Yes in my backyard” counter-protesters outside the proposed site. It reached a fever pitch early this year when anonymous leaflets appeared in neighbors’ mailboxes, charging: “No Slums In The Sunset.”

What would Henry George think of this?

Sounds to me like some of those folks don’t know how slums come about. When the taxes on a parcel of land exceed what it earns — when a retail store or small rental can’t cover the taxes due from the revenue coming in — the property will become “slummy.” Maintenance will be deferred, rents will be lowered as the building and neighborhood become less desirable, and in many cases, the building may be abandoned, boarded up, as it becomes too much of hassle to manage as anything other than a piece of land. If the taxes on land and improvements are designed to push that land to its highest and best use — redeveloping it, increasing density, as needed — you prevent slums. Slums are part of the landlord’s game. The building may be an eyesore but the land’s value keep rising, based on the investment in neighboring parcels. Let a few rentals in “leafy” Sunset become a little grubby and see how that plays out.

Of course, we all know that “slums” means any multi-family rental development and what’s behind that coded language.

It would be useful if someone unpicked the construction — a temporary nuisance — from the longer term possibilities. I have been through Sunset and I didn’t see it as a tree-lined paradise along the route I took. It was all zero lot-line homes cheek by jowl. A quick look at Google Maps doesn’t enlighten me as to any tree-lined streets: I see some widely-separated street trees but the real truth is that the greenery is in the back yards.

The streets are hardscape, streets and sidewalks with houses pulled up the sidewalk. 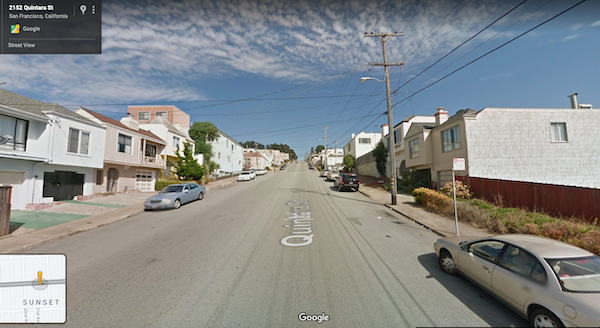 What the people of Sunset want is much the same as in Seattle: they want private yards, not public spaces, suburbs rather than a city. 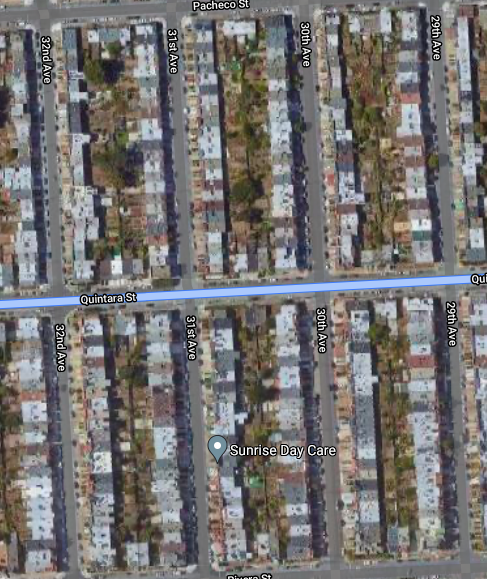 So that’s the much-loved American way of life for many…private spaces over public with the accumulated wealth of the landlord’s game. We are all held hostage to this idea and I don’t see how we negotiate our way out of it.

“A lot of cities are worried about affordable housing and gentrification so these issues have to be dealt with very carefully,” said Christopher Jones, a climate policy expert at the University of California, Berkeley. “Also, if you build more density in the urban core it could end up in more sprawl with growth, with people wanting larger, cheaper homes and then commute into these new vibrant centers. It’s a bit like pouring sand on to a map – it will keep spilling out.”

Not always sure the meaning of gentrification is understood. It doesn’t mean land or buildings gets upcycled or redeveloped. That’s actually a desirable outcome. Gentrification means a land owner sells property that other people have made valuable to wealthy newcomers, forcing those who created that value to relocate and start over. But yes, he is right, that the American way of life is suburban, that people prefer private spaces to public ones. This is what we subsidize through road and highway construction and land use policy. It’s not so much choice as a carefully curated policy that enriches land owners instead of building value for all.