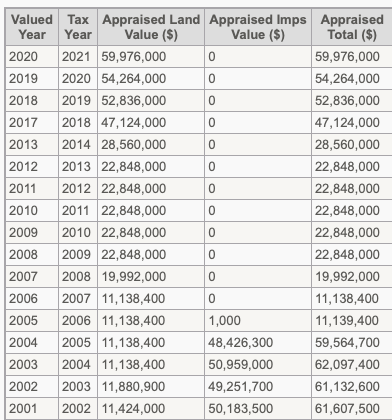 Since then it has been a hole in the ground, not even paying property taxes until it was sold about 12 years after it was surplused. But look at how the valuation of the land has jumped in the last two decades.

Imagine if the city had decided — like Seattle Schools does with its surplused land — to hold onto it and let it be developed under a ground rent/leasehold arrangement. It could have been $1M/acre, as was offered for the Mercer bioscience site. At that rate with a 2% annual increase, an acre would generate $305 million over the term of the lease, about $3 million per year (annualized).

How long will it take to match that at the $60,000 that vacant lot generates in revenue? A mere 5,000 years. And it might still be a vacant lot then.

If the same developer was offered the leasehold of that parcel for $1.3M per year rather than having to finance $60 million, imagine how much more incentive they would have to break ground and build something. That becomes an expensive asset to hold at $1.3M vs $60,000/year.

Whether or not the city would tax the improvements at a lower rate is another discussion but the almost $400 million over 99 years seems like a better deal than $5.6 million over the same term from the current tax assessment.

But the real magic here is that whatever gets developed there will increase the supply of apartments, retail space, etc, which will either slow the increase in local rents or even lower them if enough land is turned from speculative asset to productive land through ground rents.

As a side note, consider how much we have heard about raising local wages to match the rising cost of living and how much more effective it would have been to tackle housing costs through ground rents and never need to raise local wages. Higher wages that give you no more buying power are of no value. This is the real cause of the inflation we see: the scarcity and rising cost of land as shelter/commercial is what forces up prices and that money flows to wherever the owners live, rather than staying in the local economy.

NB: if you want to know where these numbers come from, you can use the Future Value of an asset in Google Sheets, Microsoft Excel, Apple Numbers, etc.

The syntax varies by application/maker (of course) but here is how Sheets does it: I’ve left the row numbers in and you can work out the columns —

You can verify your results with a 99 row column and repeated addition. It can be eye-opening to see how much money has been left on the table by people who I have to assume have never run a future value function against a ground rent.